Recent photo of Eric Freiwald, co-writer of the 1958
movie "The Lone Ranger and the Lost City of Gold"
If you have ever wondered how the 1958 "The Lone Ranger and the Lost City of Gold" movie came about, you are about to find out. I recently contacted one of the two writers of the movie and he graciously agreed to share some information with me. Eric Freiwald is this writer and I found his story to be a very interesting one and I want to thank Mr. Freiwald for his help in this article.
Eric Freiwald told me that he first met Robert Schaefer at a journalism school in Hollywood, California in 1950. Both men had been in the Navy and both chose the journalism school to attend, on the G.I. Bill. Eric went on to say that he and Schaefer collaborated on a story for Charlie Starrett (The Durango Kid). They sold the story to Columbia Pictures for $100 and it was titled "Raiders of Tomahawk Creek", although the screen play was written by another person. "Raiders of Tomahawk Creek" came out in 1950.
From that picture on, Eric and Robert Schaefer wrote many stories and various television episodes, until 1980, when Bob Schaefer decided to go into real estate sales work. Eric said that he had intended to retire at that time but then a new writing opportunity presented itself to him. Eric says that the writing job that he started in 1980 continues today. Eric is a writer for the CBS soap opera, "The Young and the Restless".
Eric told me that he believes their first television show was written in 1950 or '51 and was sold to Gene Autry, at about the time that Gene started his Flying A Productions, for his television show. Eric believes the name of the episode was "Horse Sense". Eric said that they went on to write other episodes and he sent me a list of the episodes titles that he recalls that he and Bob wrote. (I'll include the list at the end of the page) Eric said they worked for a number of years for Gene and that they also obtained other writing assignments during that time period.
Eric said that they alternated writing for "The Gene Autry Show" television series and Gene's other shows, "Annie Oakley", "The Ranger Rider", "Buffalo Bill, Jr.", and "Champion". Eric said that he and Bob also wrote for the other popular television western shows at that time, such as, "The Lone Ranger", "Hopalong Cassidy", "Adventures of Wild Bill Hickok" and others. I had asked Eric if he ever went on the filming locations and he told me this: "We rarely went on location. Once we went up to Lone Pine, California to watch Gene film a script of ours that involved an old narrow gauge railroad."
According to my figures, Eric and Bob wrote 12 Lone Ranger episodes together and they also wrote one episode in combination with two other writers, Lee Berg and Frank Moss. Eric went on to say that while they were working for "The Lone Ranger", he and Bob Schaefer became friendly with Jack Wrather and his wife, Bonita Granville. Eric said that he and Bob "were asked to come up with an idea for another Lone Ranger movie." Eric said that "We submitted "The Lost City of Gold" idea, which Jack Wrather liked. We wrote the screenplay after a few story conferences with Jack and Sherman Harris, the producer." Eric Freiwald and his writing partner, Robert Schaefer, wrote the
1958 feature movie, "The Lone Ranger and the Lost City of Gold"
I asked Eric if he remembered being on the filming location for any of "The Lone Ranger" television episodes that they wrote or for their movie, "The Lone Ranger and the Lost City of Gold". Eric stated, "I don't remember being on location with "The Lone Ranger" series, though I do remember a party after "The Lost City of Gold" movie, which was held at Wrather's Disneyland Hotel, which he owned. My wife danced with Clayton and Jay Silverheels. She said Jay, in particular, was a very good dancer. I remember getting a silver bullet from Clayton at the time, which has long since disappeared from my possession. It was not until many years later (1990's) that I called Clayton and asked for some autographed pictures to adorn my office wall. He was gracious enough to send me five or six. We talked about the old days on the phone, and that's the last time I spoke with him." Eric continued on: "I remember seeing Jay at Los Alamitos Race Track a number of times in those early days. He loved quarter horses and may have owned a few. We both loved to bet on the ponies. As for Gene, (Autry) I saw him from time to time at Anaheim Stadium when he owned the Angels baseball team. I was in a bowling league with his first wife, Ina Autry. He was a great guy."
Eric continued on and told me about two of his famous uncles. Eric said that one of his uncles was George Seaton, "the first radio Lone Ranger in Detroit. He (George) later became well known as the writer and director of "Miracle on 34th Street", "The Country Girl", "Song of Bernadette", "Airport", etc. Another uncle of mine, Eddie Loughton, was straight man for The Three Stooges, and I remember when I was ten years old taking Larry's daughter Phyllis to the movies".
I asked Eric about whether they ever met with any of the actors in regards to the scripts and I asked him specifically about one favorite Lone Ranger episode of mine, "Christmas Story". Eric told me "All of our meetings on scripts for the various series we wrote for were with story editors, producers, or directors. None were with the actors. The Christmas episode you refer to was written specifically for Christmas. I'm sorry but I remember little about it. You probably remember more than I do." 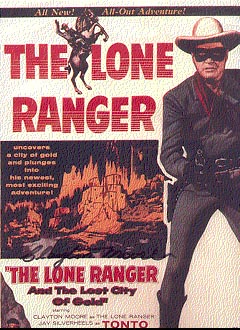 As many of us are Lone Ranger fans, many of us are sure to remember the television series, "Lassie" and Eric and Robert Schaefer had a major connection with the "Lassie" show too. Eric told me this: "Wrather apparently liked our work, and when Timmy was being written out of the "Lassie" series, he asked us to come up with a new format for Lassie. We developed the idea of having Lassie with a forest ranger. They liked it, and we wrote many, many episodes, flying to locations all over the country to get ideas. Then we would come back to Hollywood and write the scripts, which would be filmed in spring and summer weather." "We wrote many special Christmas episodes for Lassie, too." Eric thought they wrote for the "Lassie" show for about 10 years. 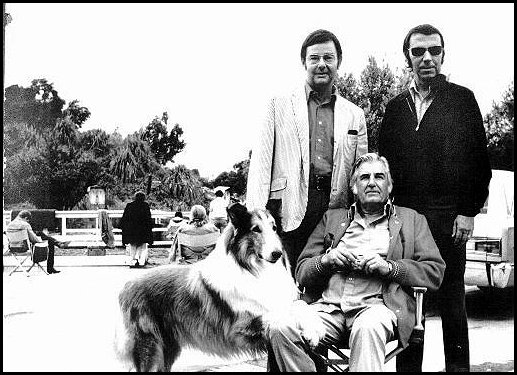 Picture taken during the filming of the "Lassie" show
Top: Robert Schaefer on left and Eric Freiwald on the right
Bottom: Lassie and Rudd Weatherwax
I asked Eric if he had saved any of the scripts for any of the shows that they had written over the years. Eric told me, "I kick myself over and over for not saving scripts. I only have a few Lassie scripts. I'm trying to get some old Lone Ranger scripts...I also passed up all the lunch boxes, and other commercial items that were available and free to me in those days. Never thought ahead that they'd be so collectible."
Eric: "I do remember one thing that Bob and I used to do in those early days. We would drive down to Knotts Berry Farm (which was small and primitive in those early days) and wander down the old western street to get in the mood to dream up new ideas. It seemed to work, because we always came back with a new story. Today, of course, Knotts Berry Farm is a major tourist attraction. In those days we often were the only ones walking that street. Yes, we wrote our scripts on old typewriters. We would talk over our story, lay out the scenes, and sometimes I would write part of the script and Bob the other part. Often, one of us would write the whole script and the other go back over it to add his ideas."
Eric wrote to me, "I am now 72, but much younger in mind and spirit." Eric also wrote to me that he lived in California until 1986 and then he moved to Arizona. He continues to write for "The Young and the Restless" and that "I now work from my home, sending my scripts via computer to CBS in Hollywood, where the show is taped." Eric has received two Emmy Awards in the past for "The Young and Restless" and has been nominated again this year, 2000, for another Emmy Award. Eric told me that Robert (Bob) Schaefer is living in California and plays a lot of golf these days. As a last bit of recognition for their writing prowess, Eric listed the following shows that they wrote for during the past years: "The Gene Autry Show", "Annie Oakley", "The Range Rider", "Buffalo Bill, Jr.", "Champion", "The Lone Ranger", "Hopalong Cassidy", "Adventures of Wild Bill Hickok", "Tales of Wells Fargo", "The Beverly Hillbillies" (3 shows), "Maverick" (1 show), "Tales of the Texas Rangers", "The Man from Blackhawk", "The Adventures of Kit Carson", and a few others that Eric has forgotten.
My thanks to Eric Freiwald for giving his time to send me the information, for answering some of my questions and for some great information. Following will be a list of the Gene Autry shows that Eric Freiwald and Robert Schaefer wrote and a list of The Lone Ranger episodes that they wrote and that I compiled. If any of you know of any scripts that are available, that Eric and Bob wrote, let me know and I will pass the information on to Eric.

Click on HOME to go to Clayton Moore, The Lone Ranger page!

This is a non-profit page.
Page Layout and Design by Steven Jensen
COPYRIGHT © 2000
ALL RIGHTS RESERVED!